The complicated challenge of comprehending human behavior necessitates a crucial insight. As a result, it is not surprising that numerous theories have studied personality and associated human characteristics. Among the authors that discussed their views on personality were Freud and Adler. Despite having divergent opinions, both ideas contend that early experiences have a significant impact on one's development throughout a lifetime. Adler believed that an inferiority complex was a significant determinant of human conduct, in contrast to Freud, who saw sexuality as having an impact on personality. The latter, however, asserted that people could change, even though early experiences greatly influence later conduct. Analysing the key parallels and divergences between psychoanalysis and Alderian theory is crucial.

Freud created the foundation of psychoanalysis by offering justification for sexuality. Freud was greatly affected by Ernst Brucke and Charles Darwin, but Jean-Martin Charcot, whose use of hypnosis was crucial, had the most impact on the theory. Freud overheard Charcot talking about a female patient who was experiencing signs of hysteria, which he blamed on her genitalia. The incident was one of the key factors in convincing Freud to make the connection between sexuality and personality. According to the theorist's view, there was a link between neurosis and the unsolved sexual issue.

Sigmund Freud was awestruck by Charcot's use of hypnosis to treat hysterics while he was in Paris. He looked into hypnosis, though, after returning to Vienna, and discovered that it was unsuccessful in promoting long-term treatment. Freud decided to collaborate with Josef Breuer, who at the time was hypnotizing patients with hysteria before asking them to recollect their early symptoms as part of a cathartic therapeutic technique. Repressed emotions might be expressed more easily when the patient is allowed to revisit their memories. Often, the symptoms vanish after the catharsis. The procedure turned out to be more successful than hypnosis. Due to these experiences, Freud developed the field of psychoanalysis. 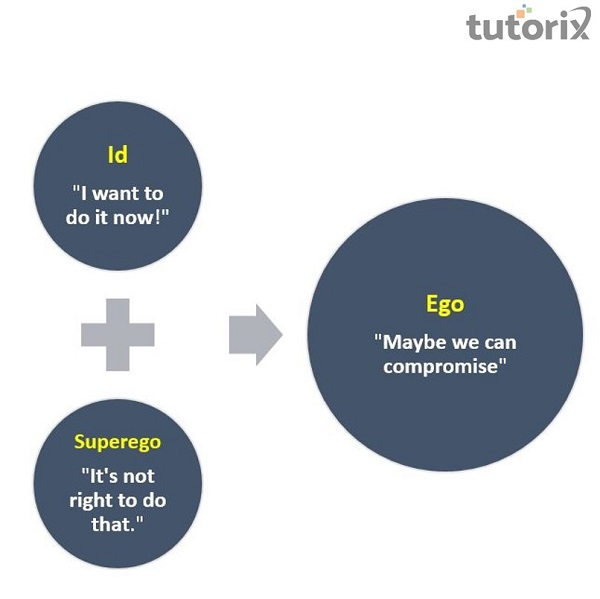 According to Freud, the power of irrational forces suggested that sexual and violent impulses were what controlled people's actions. The thinker emphasized how early experiences shape a person's personality. One must look back at a person's struggles from their youth to understand them. Inadequate problem-solving at any level of development, according to Freud, results in disordered personality development. According to Sigmund Freud's theory of the human psyche, making concessions is the best method for reconciling conflicting demands in life. The theory supports the idea that people are affected by other incentives and biological urges. People's behaviour is significantly influenced by a variety of factors, such as past traumas and cultural norms. Adler's early life was characterized by illness and feelings of inadequacy and inferiority, which influenced his way of thinking.

A sickness and feelings of inferiority and inadequacy toward his siblings defined Adler's early years. Alder was defeated by experience. He was inspired by his early upbringing since he thought that inferiority complexes were a driving force behind people's actions. According to information, Adler was his family's second-born son. Due to his inferior health to that of his older sibling, he received unfavourable treatment. Adler was dissatisfied with the situation and decided to make up for it by working hard in school.

Adler claimed that the fundamental neurotic component contributed to the sense of inferiority. According to the theory, adult behavior would continue to show signs of the age at which a person stopped developing if the symptoms appeared early in life. Some of the core ideas that the theory investigates include striving for excellence and importance, creating a distinctive lifestyle, and understanding the constellation of families. It is related to the requirement to boost human motivation, which is otherwise perceived as neurotic striving that verges on unhealthy or destructive competition. According to Adler, everyone has certain flaws that have an impact on how individuals build their personalities and how they deal with difficulties.

The inclination to be aggressive and dominate others is what defines the ruling type. People that fall under this group are sensitive and frequently put up walls around themselves as a kind of defence. These people suffer from phobias, obsessions, anxieties, dissociations, and compulsions and lack the strength to resist them.

Adler was of the idea that the human personality was a social construction, with birth order having a significant part in determining development. This was in contrast to Sigmund Freud, who thought that the human instinct and many problems individuals experienced were traceable to their sexually-based conflicts. To conclude that memories may be linked to childhood, Freud used free association techniques with his patients. Theorist: Sex-related difficulties bordered on suppressed sentiments.

Following the modification of Freud's theory, the id, ego, and superego emerged as three new rigid categories. They frequently clash while forming personalities. Conflict can lead to neurosis if it is not managed properly. However, Adler insisted on seeing a person as a whole rather than as a collection of components. It has been noted that he frequently differed from Freud on how to evaluate an individual's behaviors and personality. Adler focused on social and cultural aspects, whereas Freud placed more emphasis on sexuality. Likewise, his idea was based on personal experiences from his youth. According to Adler, birth order and inferiority both have an impact on personality when it comes to social interactions. 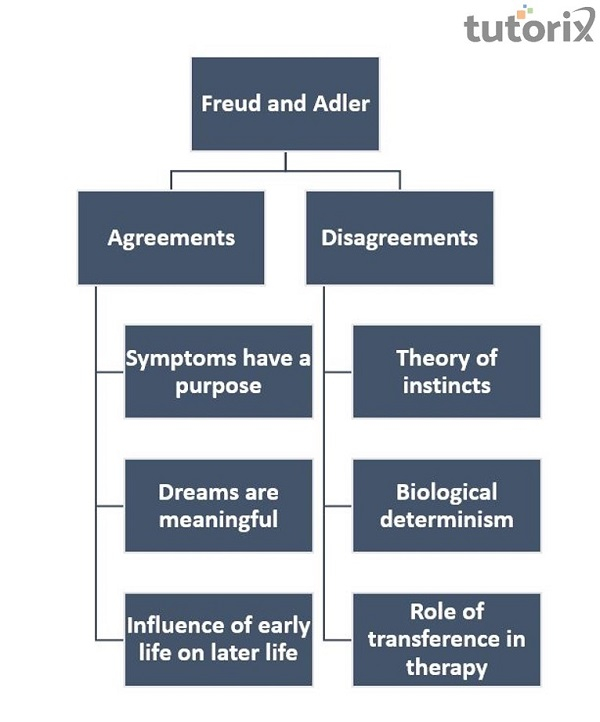 Adler's theory is less exciting than Freud's since it lacks sexuality, yet it is nonetheless valuable, vital, and applicable to describing human behaviour. Despite the apparent contrasts between the ideologies, it is clear that they both focus on the basic difficulties that individuals encounter in life. Theorists were striving to diagnose and treat a variety of psychological diseases. Regardless of the methodologies used, Freud and Adler continue to play an important part in the advancement of psychology.