Anxiety: A Threat to the Ego PsychologyAbnormal Psychology

We have often heard people say that it would be good if they could go back to their mother's womb as that was the safest world, and they did not have to deal with the odds of reality. As a fetus, their needs are satisfied without delay. From that secure environment to suddenly being thrust into the real world where there is so much to perceive at once, the child becomes ill-aware of its surroundings and finds it hard to cope—this unwelcoming change of being put in such a hostile environment account for future reactions to traumatic experiences.

According to Freud, birth trauma is our first encounter with anxiety, which is the fear that arises from a conflict between the id, ego, and superego. The failure to cope with this anxiety and let it escalate to a point where we are in danger of being overwhelmed implies that it has turned traumatic. What Freud meant is that irrespective of age or maturity, we shall certainly be reduced to a faltering state of helplessness that will leave us feeling anxious and threaten the sanctity of the ego. Freud initially reasoned that anxiety was largely sexual in origin. Sexual thoughts and impulses which could not be expressed were repressed and then transformed into some symbolic representation.

Phases of development of the concept of ‘anxiety’ by Sigmund Freud

The earliest theory of anxiety goes as far back as the mid-1890s, when Freud linked anxiety to sexuality, defining it as a sexual excitation that has been transformed into anxiety. This was the toxic phase which argued that when the paths to gratification are blocked, the unsatisfied libidinal energy builds up by taking on a toxic characteristic, only to find its release in anxiety.

From that, Freud defined anxiety as a phenomenon arising out of repression, which occurs when society's moral codes thwart sexual urges. His 'toxic theory' was thus modified to include internal blocks to sexual release well instead of focusing on just the external ones.

After initially viewing anxiety as a modified libido, Freud started to develop a new and quite different theory of anxiety in the late 1920s. This was the third phase. Here, he made an important dichotomy between:

This final phase gives anxiety a much more central place in the workings of the psyche: instead of being a kind of side-effect of repression, it was now possible to think of the very contours of the mind itself, with its defenses and symptoms, as above all a means of avoiding anxiety. 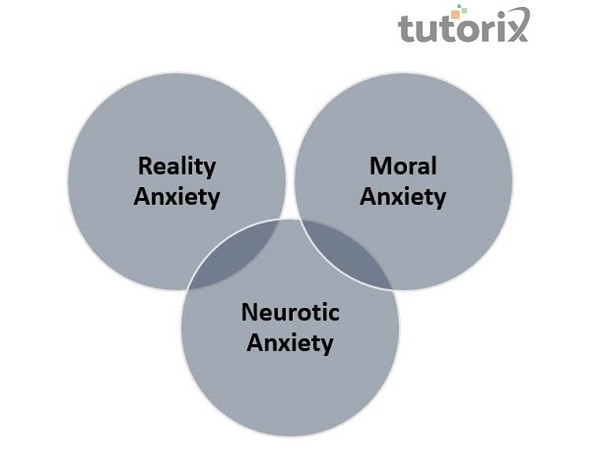 Anxiety serves as a warning to the person that something is amiss within the personality. It induces a certain state of tension in the body, which drives the individual or motivates them to satisfy or reduce it, much like the satisfaction of hunger or thirst. It serves as an alert that the ego is under threat, so unless actions are taken, the ego might be in danger of being overthrown. Thus, if basic anxiety ceases, there will not be a warning sign to safeguard the ego. However, if it exceeds normal levels, the ego, again, is in danger. Therefore, the ego has to be a bridge between the id and superego and constantly work towards achieving harmony.