B. F. Skinner: As a Psychologist PsychologyPersonality Psychology

Considering free will to be an illusion, he described human action as dependent on the results of previous actions, and he proposed a theory and named it the principle of reinforcement. Through his theory, he stated that if the consequences of an action are adverse or bad, there is a high chance the same action will not be repeated; on the other hand, if the consequences are favorable and pleasant, the chances of the action being repeated increase. Yes, I am talking about none other than B. F. Skinner, an American psychologist, behaviorist, author, inventor, and social philosopher. Skinner was a professor of psychology at Harvard University.

Grace and William Skinner, both lawyers, gave birth to Skinner in Susquehanna, Pennsylvania. Despite having his concerns about damnation dispelled by a Christian instructor, Skinner eventually drifted away from faith altogether and settled on agnosticism. When his younger brother Edward died of a brain bleed at 16, it was devastating to the family. When Skinner decided to fulfill his dream of becoming a writer, he enrolled in Hamilton College in New York. His serious, bookish demeanor made it hard for him to initiate conversations with other students.

Surely there is more to this tale. He is a full-fledged brother of Lambda Chi Alpha now that he has accepted the pledge. After finishing his undergraduate degree at Harvard in 1931, Skinner remained there for graduate work. Starting in 1936, he taught at the Chicago campus of the University of Minnesota. Before returning to Harvard as a tenured professor in 1948, he worked at Indiana University (where he would have relocated in 1945) as program director for psychiatry in 1946 and 1947. He continued his education at Harvard for the remainder of his life. After agreeing with its principles, Skinner 1973 signed the Humanism Manifesto II. 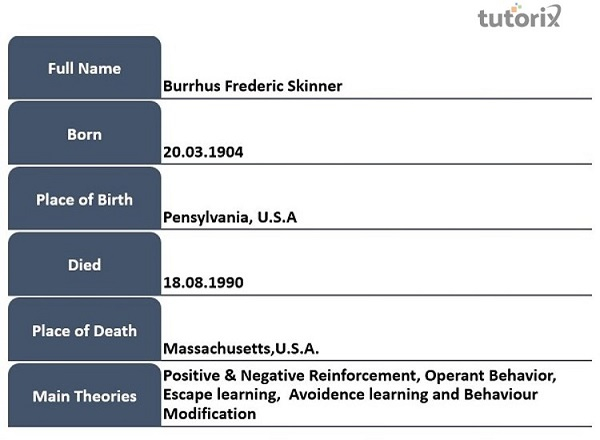 Contribution to the Society

Skinner has contributed a lot to the present-day psychological field. One of these contributions is the theory related to behavior. Against the backdrop of psychoanalytic theory and other previous schools of psychology's inability to establish forecasts that could be verified empirically, Skinner claims that his approach to studying behavior, which he calls "radical behaviorism," evolved in the early twentieth century. This philosophical viewpoint in behavioral science asserts that individuals' predictable behaviors can be attributed to the reinforcement they have received in the past. Skinner's early writing, including his seminal essay The Conduct of Organisms, established the framework for his cognitivist philosophy. Here he presents a systematic analysis of how the natural world might shape human behavior. Skinner spent much time thinking about this issue, even though most human behavior cannot be reduced to a series of real answers reinforced in isolation.

Using "chaining," Skinner demonstrated how seemingly complicated behaviors might be broken down into a series of simple responses. Scientific studies back up the "chaining" theory, which proposes that one behavior can lead to another by providing the necessary context for it to occur. A discriminative stimulus may also serve as a "conditioned reinforcer" in the context of a classroom setting. There is also the option of using the alarm's "turn around" light to emphasize the timing of your lever press. We can design more complex chains, such as "noise - turn around - light - press lever - food," by introducing more stimuli and responses.

As Skinner observed, a large deal of activity, especially human behavior, cannot be described by progressive molding and the development of reaction sequences. Complex behavior, such as a guest following the directions posted at the front desk to the elevator, often occurs in two stages: initially and finally. Skinner proposed the idea of rule-governed behavior to explain these kinds of actions. Babies can be taught to "jump," "open the book," etc., and will do so if the instructions are repeated. When a large enough number of responses are subject to such verbal control, a series of verbal stimuli can elicit an infinite variety of complex reactions. The second contribution of B. F. Skinner was in terms of tossing the term reinforcement. Fundamental to behaviorism is the idea of reinforcement, either positive or negative.

B. F. Skinner's interest in the scientific study of human behavior was inspired by his time at Harvard. His behavior modification device, a Skinner box, got widely used. The Skinner box was used to train animals to press a bar or key in exchange for food, water, or other reinforcements. Typically, pigeons and rats were utilized as test subjects with this equipment. 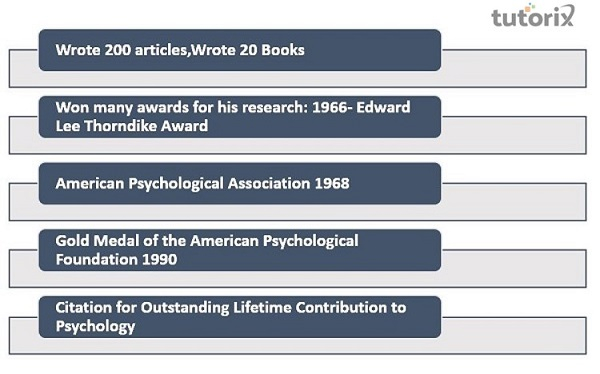 B. F. Skinner developed the cumulative recorder while a student at Harvard kept track of reactions in the form of a sloping line. Specifically, Skinner observed that engagement increased after participants got a reward but decreased when no reward was offered and that the outcome significantly impacted how fast the animal responded (as depicted by the slope of the line).

As a result of the cumulative video recorder, Skinner could see how reinforcement time affected response rate. B. F. Skinner utilized this equipment to debunk the ideas of John B. Watson and Ivan Pavlov, which claimed that the stimulus's proximity conditions an organism's reaction to a stimulus. Instead, actions are based on how well the response is received. The term "operant behavior" was used by Skinner to describe a certain behavior. B. F. Skinner created this "baby opener" in 1943. The infant tender was an acrylic-fronted cradle that kept the infant warm and cozy. In response to a demand from his spouse for a more secure crib option, Skinner created this device.

"Radical behaviorism" is a term that B. F. Skinner coined to describe his theory. He argued that people's actions were conditioned and that free will was an illusion. Among Skinner's most important discoveries and contributions to psychology is the method of operant conditioning (Skinner's approach to education), reinforcement scheduling as a concept, research frames as a new dependent variable, and the development of a cumulative recorder for keeping tabs on participation rates. Additionally, B. F. Skinner theorized that a person's emotional state could be interpreted as a propensity to act in a certain fashion. For instance, someone feeling angry toward another person is more likely to act aggressively toward that person, such as by shouting at or physically harming them.