'Binge,' a miniseries centered around the character Angela, was a 3-episode miniseries depicting how distraught eating disorders can be through dark comedy. The main character Angela was often seen eating, throwing up what she just had, and eating right after that. She kept worrying about her weight, got sad after looking at her body, and exercised. Still, throughout the series, you can find her eating and purging. Angela had bulimia nervosas. As depicted in the miniseries, the common characteristic is binge-eating. Another one may wonder what binge eating is. Is it similar to the concept of binge-watching or binge-reading? Wouldn't that mean one keeps eating throughout the day? And how is all this related to self-evaluation? 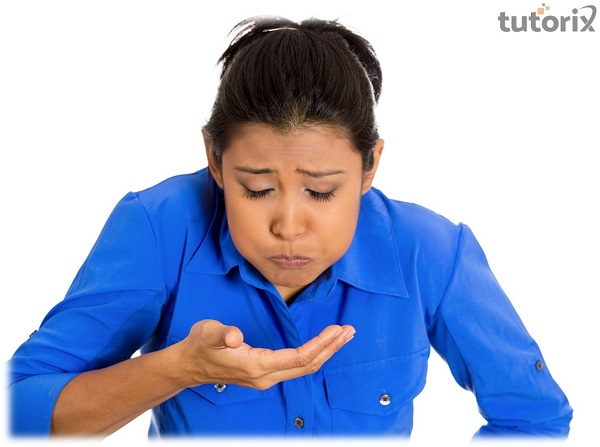 What is Bulimia Nervosa?

Also known as bulimia, bulimia nervosa is an eating disorder in which an individual remains excessively concerned with his or her body shape and body. So, what these people do, they purge with the objective of expelling the calories that they have eaten. Binge eating means eating too much in short period of time, and purging is a process through which consumed food can be expelled out.

The given time line describes the understanding of bulimia nervosa.

The first description of bulimia nervosa in the scientific literature was done in the 1900s by Gerald Russell as an "ominous variant" of anorexia nervosa. For the first time, it was added in DSM-III with emphasis on binge eating and was later explored more in DSM-III-R, where components of compensatory behaviors and concern over weight were added. From there, the diagnostic criteria were further refined with revisions made in DSM-IV and later in DSM-V.

According to DS-V-TR, Bulimia Nervosa has three essential features: recurrent episodes of binge eating, recurrent compensatory behavior to intercept weight gain, and self-evaluation shaped by body shape and size. The episode of binge eating is characterized by the amount of consumption in a short, discrete time frame and a sense of lack of control. Individuals also indulge in inappropriate compensatory behaviors to stop their weight from increasing—self-induced vomiting. Purging food, misuse of laxatives, fasting, or excessive exercise are all commonly observed behaviors, and all these symptoms must persist at least once a week for three months. Furthermore, the individual's self-evaluation is influenced by their body shape and size. The severity of inappropriate compensatory behaviors is dependent on its frequency, based on which it is classified as mild (Avg. 1-3 episodes/Week), moderate (Avg. 4-7 episodes/week), severe (Avg. 8-13 episodes/week), and extreme (Avg. 14< episodes/week).

"Episode of binge eating" is defined as consuming food in a discrete period much larger than most individuals could consume in a similar time frame. When determining whether the intake was excessive or not, context needs to keep in mind. For example, if a person had not had a single meal the entire day, they would eat more than usual at night; In the present context, it would not be considered excessive intake. "Discrete-time" is a distinct limited time frame, usually less than 2 hours. A single episode of binge eating does not need to be in a single setting; One might have food at home and then go out to have food in a restaurant. Furthermore, snacking on small amounts of food throughout the day would not be considered binge eating. 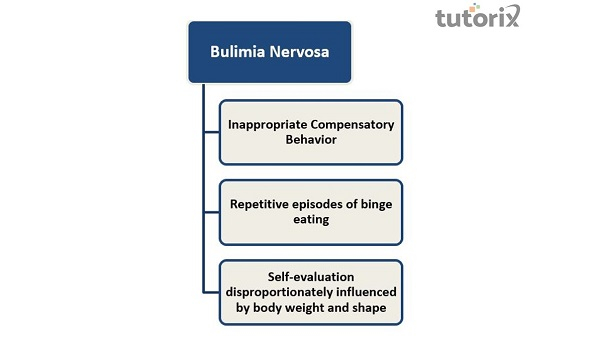 The food consumed while binging also varies from person to person and for a given individual. During binges, people tend to eat food that they would normally avoid. Binge eating is characterized more by the amount of food consumed than by the type consumed. Binge eating goes on until the individual is uncomfortable or even painfully full. Most individuals with bulimia nervosa try to hide their symptoms due to the shame attached to their eating problems.

Individuals try various methods to compensate for binge eating, like self-induced vomiting by using fingers or instruments to stimulate the gag reflex; Eventually, people can purge food at will. Misuse of laxatives and diuretics and rarely enemas are also observed. Apart from purging, individuals, in some cases, may also use exercise or fasting as a compensatory behavior. Exercise may be seen as excessive when it starts to interfere with important activities of life significantly, occurs at an inappropriate time or in inappropriate settings, pushing through exercise when sick or injured. There is also an over-emphasis on body shape or weight in the individual's self-evaluation, and these factors are typically detrimental in determining self-esteem.

Regarding Bulimia nervosa in India, a 2019 study identified only 5 cases; Three out of the five were atypical, and four out of five were females. However, this does not change the fact that bulimia nervosa is a severe eating disorder. Research has pointed out that compared to individuals who do not have bulimia nervosa, individuals suffering from it have lower explicit self-esteem but higher implicit self-esteem. This mirrors the idea that they have fragile self-esteem that is vulnerable to challenge and seek validation. They also show high levels of defensiveness and narcissism and tend to show high levels of perfectionism. All this makes people suffering from bulimia nervosa more prone to psychological distress. Research has also pointed out that people with higher self-esteem show lesser experiences with eating disorders. Gender effect has also been observed, with women more likely to experience eating disorders than men.

Causal factors of BN can range from disturbances in neurotransmitters to cultural factors. Disturbances in serotonin and dopamine have been lined with BN, although the specifics of this connection remain unclear. Family studies and twin studies have also shown some results concluding that eating disorder is more prevalent in families where one individual has BN than in families where such is not the case. According to twin studies, 31% to 93% of BN is heritable. The role of genetics in BN is still being investigated further. Posttraumatic stress disorder (PTSD) has also been found to be a risk factor in causing BN. Cultural factors like ideal weight and obsession with thin figures have also been causing BN amongst women. Body dissatisfaction and acceptance of thin-ideal are found to develop BN in adolescent girls

Though medical complications usually associated with bulimia nervosa are not as severe as low weight in anorexia nervosa, there can be life-threatening too. The result of purging and compensatory behaviors takes a toll on the body. Electrolyte disturbances are one of the most serious problems associated with BN, which results from purging. Inflammation and esophageal tears are also some of the problems that can happen as a result of constant vomiting. Laxative misuse can result in constipation or permanent damage to the colon. Gastric dilation can be a possible effect of binge eating, and Gastric dilation can lead to gastric rupture, which can be fatal. Other medical conditions can include headache, dry skin, dental erosion, abrasions to fingers from inducing vomiting, enlargement of salivary glands leading to puffy cheeks, and fatigue.

BN starts with unhealthy dieting and the motivation to be 'thin.' Individuals start restarting and limiting their food intake. Over time, their thoughts become increasingly preoccupied with food; Eventually, episodes of binge eating start to alternate episodes of restriction

Cognitive behavioral therapy (CBT) is the usual treatment for bulimia nervosa. It includes educating the individual about bulimia nervosa, self-monitoring their eating behaviors, establishing a regular eating pattern and reducing binge eating and compensatory behavior through various strategies, problem-solving and cognitive restructuring. Studies have concluded that 40%-50% of people who received CBT for bulimia nervosa saw a reduction in the intensity of their symptoms

There need to be greater awareness, more culturally sensitive screening, and sensitivity towards eating disorders like bulimia nervosa. Undermining the severity of these issues would negatively impact those who suffer from them and establish stereotypes against them