Sigmund Freud (1856 -1939) was an Austrian neurologist who developed his revolutionary ideas surrounding psychoanalysis, encouraging patients to share their deepest thoughts and emotions. Carl Jung (1875- 1961) was a Swiss psychiatrist who was an associate of Freud but later strayed away from some of the Freudian concepts and formulated his understanding of the psyche. Sigmund Freud and Carl Jung are considered the founding fathers of psychoanalytical psychology who have shaped our understanding of modern psychology and mental illness to a great extent. However, their stances on the concepts of psyche and unconsciousness are distinct, and there are discrete differences between the theories they formulated.

How was the Jungian concept of the collective unconscious deemed different from Freud's?

Although Jung was initially an associate of Sigmund Freud, he disagreed with Freud's theory that our life experiences dominate our personality and the kind of individual we are. He disagreed with Freud's view that everything in our mind is unique to each individual since we enter the world as blank slates and are merely defined by our experiences. According to Jung, this perspective is too restrictive, and he concluded that the "collective unconscious" is present with us as we first enter the world. While Freud argues that personal experience helps us become who we are, in Jung's view, these unique experiences enhance the self-regulating human psyche.

The Distinction Between Freud and Jung

Freud and Jung initially developed their theories together. However, some significant differences between the two created two schools of thought in psychoanalysis. Freud observed suppressed emotions and human behavior closely. Jung, on the other hand, thought that the human psyche was more complex, resulting in distinction in the following key areas − 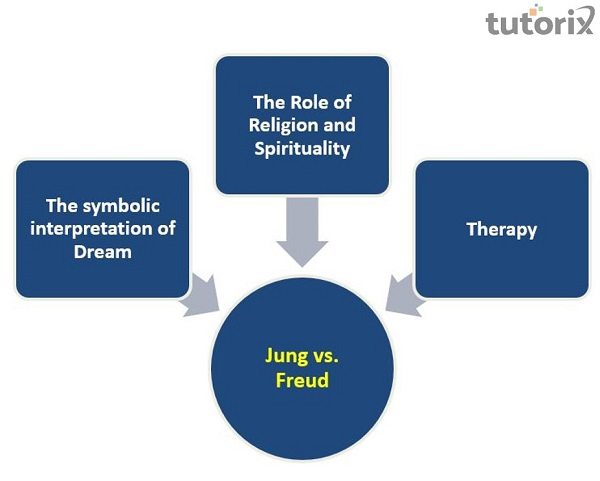 The Symbolic Interpretation of Dream

Studying and interpreting one's dreams was a significant element of how Jung and Freud conducted their studies. Both agreed that dreams were crucial for examining the unconscious mind, and according to Freud, dreams express a person's deepest aspirations. While sleeping, these urges manifest in dreams and are frequently associated with some form of sexual desire. Consequently, it becomes possible to comprehend someone's ideas and feelings to a larger extent. However, Jung did not agree that everything presented in a dream was related to a repressed sexual desire, and he found Freudian ideas too restrictive.

The Role of Religion and Spirituality

In Freud's view, psychology and scientific study should be independent of religion. He saw religion as a way to avoid the harsh facts of life. Freud also disapproved of the supernatural, even though it is a part of many different cultural traditions. Jung, on the other hand, was more supportive of religion. His views recognized religion as a crucial component of personal growth, and it encourages dialogue and enables individuals to express their problems. Jung related several religious symbols to his archetypal theory. According to Jung, archetypes are all humans' innate, shared worldviews.

Freud believed in seeing his patients frequently and regular follow-ups. Freud would spend about 45 minutes with the patient every session, and Jung considered this excessive and was restricted to only two sessions per week, each lasting about an hour.

Jung's practical approaches have more significantly impacted modern psychologists' techniques. In terms of treating a person who is a contributing member of society, they are more applicable. Furthermore, a significant portion of Freud's study revolved around using a couch. Freud believed that if his patients were comfortable lying down and looking away from the psychologist, they would be more inclined to open up about their ideas and feelings. Jung, on the other hand, thought face-to-face communication was important.

Transference was an important concept in Freud's and Jung's therapeutic association. Projecting ideas, feelings, and wants onto another person in order to analyze a situation is what they define as transference. According to Freud, this method can only be effective in a hierarchical setting. He urged his patients to employ transference in their relationships with dreams and role models. With unconventional views, Jung contested Freud's theories on transference. He saw transference as a chance for two people to comprehend one another by cooperatively transmitting their thoughts in their therapeutic alliance.

When comparing the two psychologists, it is critical to consider the distinctions between Freud and Jung in light of their respective personalities. While both significantly contributed to the conception of the unconscious and the relevance of dreams in understanding and interpreting issues of the psyche, there are important distinctions in the approach they followed. With regard to the debate between Freud and Jung, their theories still serve as the foundation for many psychotherapeutic techniques used today.