A person suffering from a conversion disorder constantly obsesses over their symptoms, desperately looking for a convincing explanation for them. Thoughts, emotions, and actions associated with somatic symptoms define different somatoform illnesses. 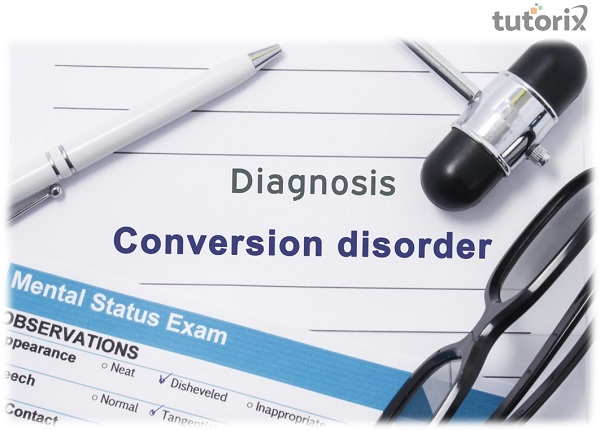 What is Conversion Disorder?

"Conversion disorder is a somatoform disorder in which a psychosocial need or conflict is converted into dramatic physical symptoms that affect voluntary motor or sensory function." Somatoform disorders are a group of psychological conditions in which a person has bodily symptoms that are not justified by a neurological or a medical diagnosis. The severity of symptoms can range from mild and occasional to persistent and severe and are beyond an individual's conscious control. These disorders are distinguished by an increased emphasis on somatic symptoms, including pain or exhaustion. Physical symptoms tend to make individuals with this type of disorder distressed and lower their daily functioning.

There are seven categories of somatoform diseases in which people exhibit a wide range of clinically significant symptoms that cannot be explained, namely:

Conversion disorder (commonly known as functional neurological symptom disorder) is a psychological ailment characterized by symptoms that appear to be neurological, often including paralysis, speech impairment, or seizures, but have no visible or known organic causes. These episodes were previously known as "hysterical blindness" or "hysterical paralysis." A psychological conflict or need is converted into significant physical symptoms that impair voluntary motor or sensory function in conversion disorder. Conversion disorder is frequently accompanied by dissociative symptoms such as depersonalization, de-realization, and dissociative amnesia, especially at the outset of symptoms or during episodes. It is common to find that individuals with conversion disorder have other mental health conditions, like anxiety or depression.

Conversion disorder symptoms can include movement, sensation, speech, or swallowing problems. They include any neurological deficit imaginable, including:

Most conversion disorders appear between late childhood and early adulthood. They typically occur quickly, during intense stress, and last for a few weeks (Kukla et al., 2010). Conversion disorders are assumed to be uncommon, affecting no more than five people out of every 1,000, and women are diagnosed at least twice as frequently as males (APA, 2000).

Factors of Risk and Prognosis

Conversion disorder is a group of mental health disorders widely recognized as somatoform disorders, characterized by physical illness symptoms that do not have an organic explanation. The cause is unknown, but it has been said to be related to psychological factors. Conversion disorder may be triggered by a stressful event, such as a car accident or the death of a loved one. The symptoms may be temporary or permanent. Younger children may have a better prognosis than adolescents and adults.

Individuals experiencing conversion disorder symptoms should seek effective and timely medical assistance because the symptoms could result from an underlying medical condition. It is important first to find the root cause of the problem. Once a person understands the root cause, they can work on coping skills and other alternatives to alleviate stress and emotional trauma to the greatest extent feasible. Reducing the triggers helps reduce the physical symptoms. Treatment options for conversion disorder include:

Conversion disorder is a condition in which mental or emotional traumas cause stress, manifesting as a physical disease. The symptoms and signs of conversion disorder are indeed difficult to distinguish from a profusion of other possible diagnoses. Thus the first step should be a thorough assessment of each patient's pathology. It is critical to acquire the patient's medical and psychiatric history as promptly and effectively as possible while being mindful of how and when to inquire about psychological symptoms. A comprehensive mental assessment is required to explain the genesis of symptoms and the existence of stressors and comorbid disorders. There is no single treatment procedure that can be universally advised.