Everyone knows the term "identity crisis," especially when they are teenagers, and it is a dramatic phase and carries a negative connotation. Some psychologists, however, believe it is a normal part of social development. Erik Erikson formulated a theory called the eight psychosocial stages of development which he describes this phase in his fifth stage, identity cohesion vs. role confusion. 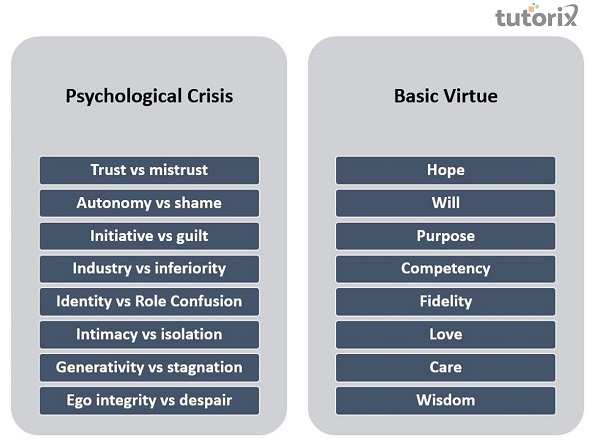 The German-American psychologist Erik Erikson coined the term "identity crisis." Some psychologists say that Erikson did so because of his turbulent childhood. He was born in Germany in 1902 and adopted by a Jewish stepfather. He often felt like an outsider and was teased for being Hewish. As he experienced identity crises between the ages of 12–18, this may be why, he speculated, his struggle was present in other children as well.

What does Happen Before Identity Cohesion vs. Role Confusion?

This fifth stage of development usually occurs between the ages of 12 to 18. The success of this stage depends on how well individuals have inherently resolved the conflicts of the initial stages. This is a gateway into adolescence, where developing a self-identity is crucial. In this stage, parents see their children as trustworthy and are trusting in return. Individuals need to see their child as a 'somebody.' Young people have a budding sense of independence and personal efficacy, which must be recognized. Here they recognize their competence. Before entering this stage, the individual is a loose collection of segments of identities based on previous experiences. This is also mixed in with the individual's sense of either positive or negative identity. This contains everything the individual has done for which they were punished. Feelings of incompetence and inadequacies are prominently present.

Now, during adolescence, the individual questions these prior identifications. Then the ego reconstructs them while integrating these with strong, emerging sexual feelings and social roles.

Identity is a multifaceted concept- it refers to the sense of uniqueness one gets from various psychosocial experiences. The ego integrates all the identifications learned as participants in different groups and all self-images. It includes feelings of making good partner choices and our connection with the future when opting for certain careers. This is important in establishing who the individual is in a social setting. Therefore, identity consists of what the individual is, what they want to become, and what they are supposed to be.

Identity cannot be easily achieved; an identity crisis is required. This is the connection between childhood and adulthood. Here, individuals must solve multiple special problems, and improper resolution of these problems forces the individual to find an identity again in later stages. These crises in youths stem from role confusion. Here, they experience a tough period of self-consciousness characterized by awakening sexual drives and body growth. This brings doubts and shame over what they are and may become. The most troublesome part of this stage is deciding one's occupational identity. Though individuals want to commit to goals that give meaning to their lives, many find it extremely difficult.

The Concept of Totalism

Erikson gave that confused individuals often try to establish their identities by over identifying with their heroes, making them defensive in many ways. Thus, their behavior during this phase is characterized by totalism, which refers to setting absolute boundaries regarding one's values, beliefs, and interpersonal relationships. Here, simple ideologies may be embraced with little questioning.

Erikson thought these behaviors should be viewed as alternative ways of dealing with experiences. His view on development is optimistic, and he believes that such failure to behave constructively results from political, cultural, and technological changes that lead to establishing values that no longer work. Here, the role of mentors and role models is crucial. Adults need to help individuals with unclear values and provide them with guidance. They need to emulate behaviors that are socially good and acceptable. Remember, both generations need each other to survive.

Unsuccessful resolutions lead to the development of negative identities. Here individuals act in hostile ways toward the roles offered by society. They tend to be destructive to themselves and society. The successful resolution in this stage leads to the emergence of fidelity. Fidelity is the ability to maintain loyalties despite the inevitable contradictions. People make selections of friends, mates, and co-workers and commit to these people. They are loyal to their visions and move to meet them. They are ready to take on the world for what it is.