You must have heard the word personality very often. As explained by modern psychology, the concept of personality is based on western principles. There are various other explanations of the construct, and many psychologists now focus on understanding the concept from a different lens. Have you ever wondered if the ancient Indian text could provide insight into personality? This article aims to elaborate upon the Indian perspective of personality using the 'Triguna' principle.

Indian perspective on personality is heavily drawn from the Samkhya philosophy. It is a dualistic school of Indian philosophy that views Purusha (also known as "consciousness" or "spirit") and Prakriti (meaning cognition, mind, and emotions) as the two independent ultimate elements that make up reality and human experience. Indian thought also considers personality as a relatively stable construct that individuals have. It states that each individual has unique and distinct characteristics, called 'Svabhava.' This is what distinguishes people from one another. Further, it states that everything in this universe, whether physiological or psychological, arises from the Prakriti and the Purusha, or consciousness is the inner core of the personality.

Prakriti is formed by three components of 'Gunas,' namely Sattva, Rajas, and Tamas. These three components work together and mutually interact. Sattva signifies light and enlightenment, and Rajas denote energy and movement, while Tamas stands for darkness and inertia. 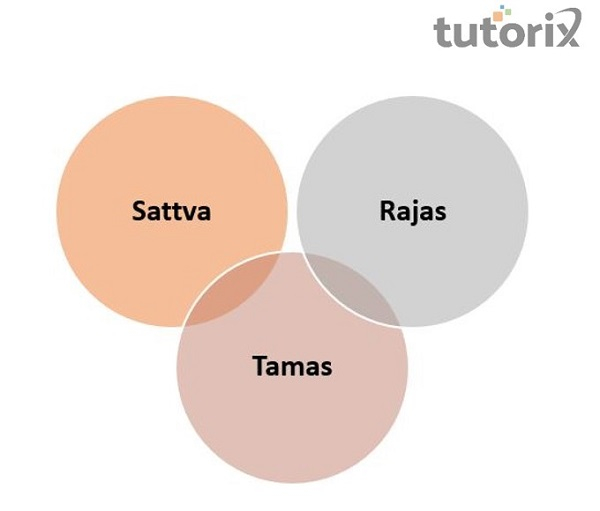 The degree of predominance of one Guna determines the individual's personality type. Based on the above understanding, personalities are categorized into three types: sattvic, rajasic, and tamasic. Here is a detailed explanation of the three Gunas. 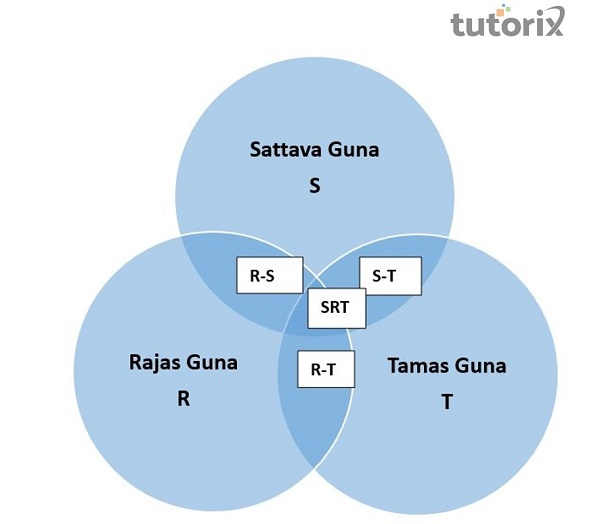 What is the Relationship Between Triguna and Personality?

These three Gunas are mentioned in Bhagwatgeeta (An ancient spiritual text) and Atharvaveda. The dominance of these Gunas at any point determines the attitude with which the human mind functions. Additionally, they determine the intellectual and mental potential of every individual. These Gunas work together in cooperation and are in conflict at times which are inseparable from one another and constantly go together. No one can produce anything without the assistance of the other two. The dominant Guna determines the nature of things, with the other Gunas in a supporting role. The existence of good, bad, or neutral/indifference or pure, impure, etc., is all determined by the predominant Guna. The personality and the characteristics associated with a particular Guna or combination of Gunas are undoubtedly influenced by the proportion of each Guna, which may rise or fall at any time. Here is a table to understand how the manifestations of these guns at any point may reflect in personalities.

In Ayurveda, it is believed that these three Gunas are vital energies of the mind. At any point, the dominance of any combination of these gunas determines the personality. Various foods can help in balancing these gunas as per the Ayurveda.

Many studies are taking place to view the concept of personality from an Indian lens. There are various similarities and differences between the modern psychological thought process and the Indian philosophical viewpoint of personality. Indian school of thought talks about concepts like consciousness (Purusha) and the nature of matter (Prakriti). It further builds the concept of personality on Prakriti's existence and dominance of strands or components (Gunas). These guns offer a detailed description of various attributes of human personality. At any point, the dominance of these three Gunas or their combination determines human personality.