Clinical cases where individuals engage in binge eating, which is sometimes followed by purging behavior or starving oneself and having an insufficient amount of food due to negative body image issues, are common. However, sometimes individuals may ingest nonfood items or objects such as rubber, stone, hair, dirt, etc., that have no nutritional value. While we may ponder if it is concerning, as it is common in the case of many children, when individuals engage in such eating behavior at a developmentally inappropriate age, it becomes a clinical concern that requires immediate attention.

Pica is a psychological disorder categorized as a distinct form of eating disorder by the DSM 5. It is characterized by a craving for non-nutritive materials such as ice, soap, hair, paper, metal, dirt, stones, glass, or chalk. The name "pica" comes from the Latin word for "magpie" (picave), a bird renowned for its peculiar feeding habits and willingness to consume nearly anything. People who have pica may ingest nonfood, and some of the most common cravings include— 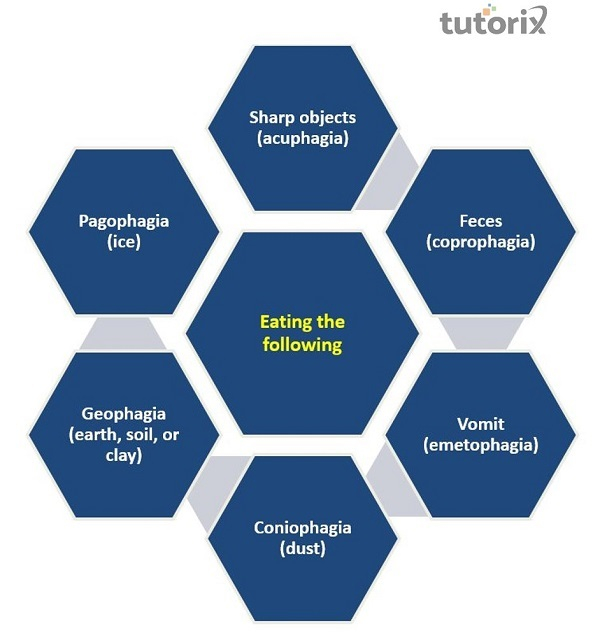 Diagnostic Criteria and Symptomatology of Pica

According to the DSM-5 criteria, the odd eating behaviors must persist for over a month at a time when eating these items is seen as developmentally inappropriate, not deemed culturally accepted, and severe enough to require clinical attention. In a nutshell, the DSM-5 posits four criteria that must be met for a person to be diagnosed with pica:

Children's physical and mental development may be hampered by intoxication caused by pica, and it may also result in less obvious symptoms like dietary deficits, parasitosis, and surgical emergencies to treat intestinal blockages. Other emotional and mental illnesses have been connected to pica. Pica is a coping mechanism significantly connected to stressors like emotional trauma, maternal deprivation, family problems, parental neglect, pregnancy, and a dysfunctional family structure. Pets like dogs and cats are also known to have pica.

The DSM-5 states that biological abnormalities are rarely discovered, but mineral deficits are occasionally linked to pica. Geophagists, Pagophagists, and Amylophagists (those who eat earth, ice, or starches) are more likely to be anemic, have low hemoglobin concentrations, have fewer red blood cells (hematocrit), or have lower plasma zinc concentrations. The practice of geophagy is more frequently linked to anemia or low hemoglobin, and anemia is more strongly linked to pagophagy and amylophagy. In addition, in comparison to the general population, anemia or low hemoglobin may be more common in youngsters and pregnant women. A movement has emerged to examine OCD as the cause of pica due to cases of pica being linked more recently to the obsessive-compulsive spectrum. When lead poisoning and dietary deficiencies are ruled out, mental distress is the most likely cause of pica. The youngster may exhibit different aberrant behaviors in these situations, such as weird language use, strange play, or problems interacting with classmates.

Treatment for pica may differ depending on the patient and the suspected cause (for example, whether the patient is a child, developmentally disabled, pregnant, or psychogenic) and may focus on psychosocial, environmental, and family-guided approaches; iron deficiency may be treated with an iron supplement or dietary changes. The first step frequently entails checking for any mineral deficiencies or other concomitant illnesses and, if necessary, addressing them. Therapy and drugs like SSRIs have been used successfully for pica which seems to have a psychogenic etiology. Prior studies have, however, advised against the use of medicine until all other non-psychogenic factors have been eliminated.

For a better prognosis or an effective course of treatment, the clinician will consider the most likely causes of pica. For instance, if pica is brought on by social inattention, a treatment plan can consist of ignoring the pica while praising and focusing on other positive actions. If a person uses pica to get out of a situation or activity, the motivation behind the desire to leave should be looked into, and the person should be placed in a different circumstance. If sensory feedback motivates pica, another way to experience that sensation should be available. Other non-medication methods for oral stimulation could be munching popcorn or chewing gum.

It has been demonstrated that behavioral interventions for pica significantly lessen the condition's severity in people with intellectual disabilities—by 80%. Positive reinforcement for good eating behavior may be used in these treatments. Aversion therapy is a technique whereby patients are taught which foods are healthy and which ones they should avoid through positive reinforcement. Treatment is frequently compared to that for addictive or obsessive disorders (such as exposure therapy). The likelihood of success with treatment is strong and often declines with age, but it varies depending on the underlying etiology of the condition. Developmental factors typically have a lower success rate.

Pica is a serious psychological condition that lacks awareness. It may begin in childhood, and it is important to keep children under supervision and check up on their eating behavior as they are at a developmentally vulnerable age to distinguish between the right food and nonfood patterns. Thus, even though there is no definite way to prevent or stop pica, regular monitoring of kids who are known to put things in their mouths and carefully observing eating habits may help identify the issue before complications arise.