Regurgitation is the act of bringing swallowed food back into the mouth. It does not sound very pleasant, does it? However, there is a separate disorder centered around it under the category of feeding and eating disorders in The Diagnostic and Statistical Manual of Mental Disorders, Fifth Edition, Text Revision (DSM-V-TR). Not only is there a separate disorder for it, but it also affects 5.8% of people, according to a survey that covered 26 countries and 50000 participants. What exactly is regurgitation disorder? 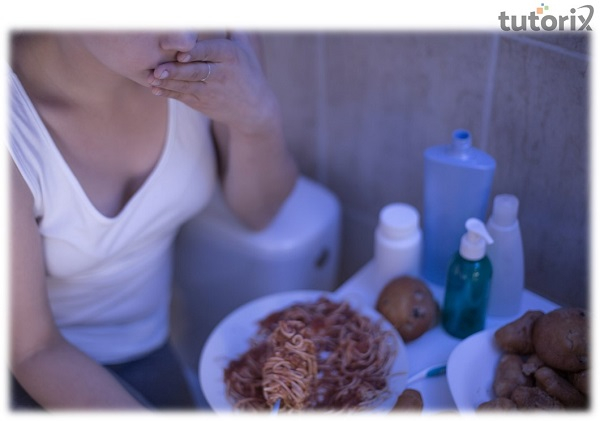 What is Rumination Disorder?

DSM-V-TR characterizes rumination disorder as repeated regurgitation of food for at least one month. The regurgitated food is either rechewed, re-swallowed, or spit out. Further repeated regurgitation is not explained by any other associated gastrointestinal or other medical condition. It also does not occur exclusively during anorexia nervosa, bulimia nervosa, binge-eating disorder, or avoidant/restrictive food intake disorder. If the symptoms occur in the context of any other mental disorder or neurodevelopmental disorder, they should be severe enough to call for additional clinical attention.

The food previously swallowed or potentially partially digested is brought back to the mouth and is often assisted with coughing, engaging in the tongue or abdominal contraction, or placing fingers in the mouth. For some people, this activity is pleasurable, and they engage in regurgitation to self-soothe or self-stimulate. For many, it is a behavior difficult to reduce.

The onset could be at any stage of life: infancy, childhood, adolescence, or adulthood. In infancy, it is usually between the ages of 3 and 12 months and can be potentially fatal. In individuals with intellectual developmental disorders or other neurodevelopmental disorders, regurgitation and rumination behavior has self-soothing or self-stimulation functions. It has also been associated with weight loss, malnutrition, halitosis, dental erosion, gastroesophageal reflux disease (GERD), and electrolyte abnormalities. It is also comorbid with other psychological disorders like generalized anxiety disorder (GAD), depression, post-traumatic stress disorder, obsessive-compulsive disorder, adjustment disorder, constipation from a rectal evacuation disorder, and attention deficit-hyperactivity disorder.

Its development can be seen through the following time line:

The earliest description of rumination disorder was in the seventeenth century as a rare disturbance of gastric or esophageal function. The behavior gained abnormal, culturally shameful undertones. After the emergence of new findings in the eighteenth century, it was viewed as a degenerative human behavior. By the late eighteenth century, some ruminators were labeled as malingerers and attention shifted to intellectually disabled people. By the twentieth century, research also started focusing on rumination in infants.

The disorder became known for the first time in DSM-III under the "Disorders Usually First Evident in Infancy, Childhood, or Adolescence" section. At that time, it was called "rumination disorder of infancy." The symptoms included repeated regurgitation without nausea or gastrointestinal illness observed for at least 1 month and were associated with weight loss or the failure to make expected weight gain. In the DSM-IV component of rechewing, comorbid diagnosis with eating disorders was excluded and diagnosis in the context of intellectual disability was only valid when it was severe enough to warrant additional clinical attention. All features related to weight were also removed. Finally, in DSM-V, it was moved to the "Feeding and Eating Disorders" section. Although the changes in diagnostic criteria were small, they were still intended to refine clinical utility and applicability across the age range.

A characteristic position of infants with rumination disorder is straining and arching the back with the head held back. They make sucking movements with their tongue and may give the impression of gaining satisfaction from it. They may further feel irritable and hungry between episodes of regurgitation. Weight loss and failure to make expected weight gains are commonly observed, and malnutrition may also occur.

The diagnosis of rumination disorder can be a little difficult, and it solely depends on patient history and physical examination. There is no test present to assess rumination disorder; however, test may be employed to exclude the possibility of other disorders.

Treatment usually follows behavioral modification therapy. After explaining the condition to the individual, they are instructed not to expel regurgitated food but rather re-swallow it. Diaphragmatic breathing is also suggested as it hinders vomiting and competes with the regurgitation reflex. Children are recommended to chew gums to reduce episodes. Continuous nasogastric enteral nutrition support is shown to reduce symptoms in individuals with nutritionally significant weight loss and malnutrition. Continuous tube feeding can also be helpful as it reverses the symptoms of malnutrition. The use of medication has been rather limited in the treatment procedures. Proton pump inhibitors may protect teeth, pharynx, and esophagus. Antidepressants or anxiolytics may be used to target comorbid disorders.

Rumination often goes unnoticed and is misdiagnosed. Screening and treatment procedures are also not mature; Research continues. More screening is required, especially for adults. Epidemiology, comorbidity, etiology, and evidence-based treatments should be explored to define diagnostic criteria and treatment plans.